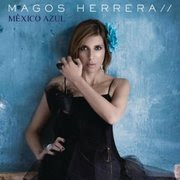 
Magos Herrera is the Cassandra Wilson of latin america. There are similarities in their warm, sultry tone, their bluesy feeling and strong command of the jazz language. What makes Magos Herrera different and certainly a unique voice in the jazz world today is her latin heritage that she proudly displays in all of her music.

The CD notes describes México Azul as a celebration of México's golden age of cinema and television. That was back in the 30's and 40's. A lot of good music came out of that era, and Magos did good job in the song selection for this album.

The percussive voice intro on "Tres Palabras" is very similar to Gretchen Parlato style. The arrangement for this track is one of the jazzier of the release.

Even though Rafael Hernandez was not from México, he was Puertorrican, his compositions were among the best of that era. "Obsesión" is one of Hernandez classics that has been recorded all troughout latin america. The ballad arrangement on this one allows Magos Herrera to bring out the feeling of every word.

Herrera is without a doubt the best jazz singer out of Mexico, and with México Azul she is establishing herself among the best singers in jazz.
Publicado por Jazz n Bossa en 9:52