CD Review: Eliane Amherd - Now and from now on 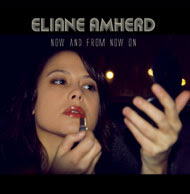 CD Review: Eliane Amherd - Now and from now on

Now and from now on is the debut release from the multi talented swiss artist Eliane Amherd. Amherd is not only a exceptionally good singer but she is also an accomplished songwriter and guitarrist. All songs on Now and from now on are Amherd originals compositions, except for Tom Waits "Temptation".

The songs on this release reflects the diversity of influences on Amherd music. The album starts with the danceable funk "Now and from now on", a song about being optimistic and achieving your dreams.

"As if" is a song with witty, and humorous lyrics (english and portuguese) and with a touch of Bossa Nova. The sensual delivery on vocals, plus the superb licks on the electric guitar played by Amherd make this song one of the hightlights on the album.

"Me fe tan pliji" is another danceable track with the polyrhythms and clave often found in caribbean music. That caribbean sound can also be heard on the song "Feel a little sorry for yourself".

There is plenty of blues on the tracks "Don't give up on me", the blues/rock "Where is home", the jazz/blues "Trust you" and the Billie Holiday-like "Steady and Slow".

Amherd goes back to Brasil in the bossa "Let me Explain" and the batucada version of "Now and from now on".

Tracks: Now and from now on, As if, Me fe tan pliji, Don't give up on me, Feel a little sorry for yourself, Wher is home, Let me explain, Temptation, Trust You, Steady and Slow, Batucada