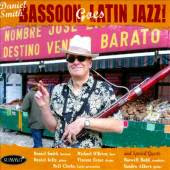 The album starts strong with Lee Morgan's "Mr. Kenyatta" and nice basson and trombone improvisations on the classic by Herbie Hancock, "Watermelon Man". The pace slow down a little on "Black Orpheus" and Antonio Carlos Jobim's "So Danço Samba". The lighter sound of the Bossa Nova allows the beautiful sound of the bassoon to be fully appreciated.

Bassist Michael O'Brien adds some powerful yet melodic solos on the boogaloo like, Listen Here. On the CD notes, Smith says, Charlie Parker "Yardbird Suite" was played over a samba beat, but it sounds very similar to the rhythms of Bomba music from Puerto Rico. Maybe this just goes to show the striking similarities of african influenced rhythms all over latin-america.

The brazilian rhythms on "Korg In" and the bossa arrangements of Horace Silver "Peace, demonstrates the huge influence of Brasil music on jazz musicians.Everyone contributes outstanding solos on the energetic rendition of Gillespie's Manteca. The album close with the danceable "Come Candela" a Mongo Santamaria composition and the strong clave of the "Mambo from the Dance at the Gym"