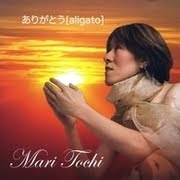 On her debut release Aligato, singer Mari Tochi brings an eclectic fusion of sounds and influences that includes of course the music from her native Japan. With her distinctive style and a sweet yet powerful voice, Tochi explores aspects of of her japanese heritage on "Opelo Kai", a song with japanese lyrics and delicate a orchestration.

"Kotodama" mix japanese and english lyrics over a funk groove. Tochi even rap a little bit on this track. "Awayuki" has a more traditional japanese sound before it changes into a slow funk. On "Long way to go" Tochi goes to Brasil with samba rhythms and the danceable sounds of carnaval. An ellegant piano intro gives way to another brazilian influenced track, the bossa "Requiem/Azul no azul do azul". On this one Tochi sings in portuguese and english.

The album ends up with mystic sounds of the title track "Aligato".