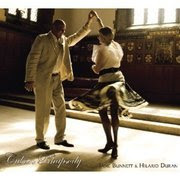 Saxophonist and flutist Jane Bunnett exploration of cuban music started back in the 1990's and she is a frequent visitor to Cuba. So Bunnett is not a newcomer to the world of latin music. In fact Bunnett received the 2002 Smithsonian Institute Award for her contributions and dedication to the development of latin jazz.

On her new release Cuban Rhapsody, Bunnett recorded with her long time musical friend pianist virtuoso Hilario Duran. Their music partnership goes back to 1990 when Bunnett went to Cuba to record her album Spirits of Havana. Bunnet and her husband Larry Cramer sponsored Hilario to move to Canada where he lives since 1998.

Cuban Rhapsody is a duo album, just piano and either flute or sax. In latin jazz music rhythm is essential, so here Hilario has the responsability of providing the rhythmic and harmonic support to Bunnett melodies and improvisations.

The music selection is superb, a collection of cuban classics beautifully played by these masters of improvisation. The duo format provide a lot of space for both Duran and Bunnett to display their improvisational talents.

This music is the cuban equivalent to jazz. It also have african roots and is a perfect vehicle for improvisational ventures. But caribbean music has a classical element also. This classical influence is more evident in a musical form called Contradanzas. Danzas from Cuba and Puerto Rico fuses african music with the classical tradition from Europe, both essential parts of caribbean music. One of the highlights of the album is precisely a medley of five cuban contradanzas, where Bunnet and Duran exchange sublime improvisations.

Duran applies that same classical/caribbean fusion on his original composition "New Danzon". From start to finish, Cuban Rhapsody has a perfect balance of elegance and virtuosity.