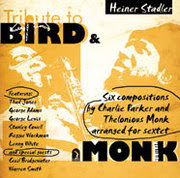 Heiner Stadler's Tribute to Bird and Monk was one of the best and most unusual albums back in 1978. And after more than thirty years it still sound as fresh and energetic as the first time it came out. This is free improvisation as it's best, played by some of the jazz heavyweights of that era, including Thad Jones on trumpet, Reggie Workman on bass and Lenny White on drums.

Heiner Stadler conducted the band and did the polytonal arrangements for the six compositions, three by Charlie Parker and three by Thelonious Monk.

Like in any free improvisation album there is a lot of dissonances on this one, but there is also a lot of swing and almost New Orleans sound in Bird's "Air Conditioning". Also in the New Orleans tradition is the funeral march intro on Monk's "Ba-lue Bolivar Ba-lues-are". The arrangement changes into a funk groove at the end. There is also some funk in Monk's Straight No Chaser", this was the 70's, the jazz fusion decade, so funk was everywhere.

Everyone had the chance to improvise over the dissonant march sounds of "Misterioso". Reggie Workman inventiveness on his bass improvisations, at one time using the bow for dramatic effects, is on of the highlights of the album.

The more traditional arrangement is Bird's "Perhaps". The walking bass, the cool swing groove and the sax, trumpet and flute melody exchange are closer to the traditional Bebop sound. Free improvisation is not for everyone, even some jazz listeners can't stand the apparent chaos of this jazz form. For those who like free improvisation, this album is a must have in their collection.