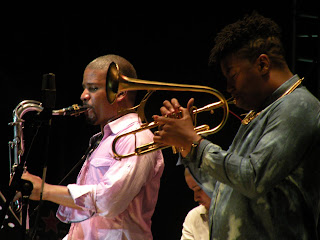 On its 21th Anniversary, the Puerto Rico Heineken Jazz Festival has become an international event. Each year the event features a diversity of local artists as well as the best jazz musicians from around the world.

The first night featured local virtuoso percussionist Richie Flores and Jamaican pianist Monty Alexander. More than 20 years ago, Richie Flores played in the first Puerto Rico Jazz Festival. On the 2011 edition, Richie came back to be the opening act of the festival. This time Richie played with his own group of excellent musicians including Puerto Rican bassist John Benitez, drummer Robby Ameen and pianist Elio Villafranca.

From the first piece, "Amigos" (Friends), Flores captivated the audience with his energy and fast hands playing the congas. Vocalist Marfil Delgado joined the group for good renditions of her own composition "Hot" and Flores original "La Vida te Dá."

After the complex arrangement and fast interpretation by the members of Flores new project Onda Mora of the classic plena "Elena Elena" (plena is a folk music from Puerto Rico), the sextet played Dizzy Gillespie's "Groovin High" and Stevie Wonder's "Overjoyed."

Monty Alexander Harlem Kingston Express was the second act on Thursday night. Alexander's music can be described as eclectic, combining elements of various jazz styles with Caribbean music, especially from his native Jamaica.

On the third piece the contagious reggae rhythms enter the scene with the integration of the Jamaican part of the group. From that moment on each arrangement was a fusion of jazz and reggae on originals compositions like "Strawberry Hills" and "Love Notes" and in the beautiful version of Bob Marley's "No Woman, No Cry."

Saxophonist/composer Ted Nash opened up the second night of the Puerto Rico Jazz Festival, delivering material mostly from his new album Portrait in Seven Shades. This album contains music inspired by masters of painting like , Monet, Dalí, and Picasso. Nash’s elegant compositions show the different colors, shades and styles of these giants of modern art.

Nash style has elements of the avant garde but at the same time is deeply rooted in the jazz tradition. The rhythm section featuring drummer Ali Jackson, pianist Dan Nimmer and bassist Carlos Henriquez provided excellent support to Nash and trumpeter Marcus Printup during their fine solos. Henriquez pleased the crowd with flawless improvisations in the blues dedicated to Matisse and in the piece dedicated to abstract painter Jackson Pollock.

Ramsey Lewis added the romantic touch to the festival second night. Lewis poetic and delicate style, good melodic sense and ability to convey diverse emotions with just one note, captivated the audience. On his music Lewis explores elements of gospel, blues, funk, classical music and of course jazz. What was supposed to be a trio turned into a quartet with the addition of master guitarist Henry Johnson. One of the highlights of Lewis presentation was the improvisation bassist Joshua Ramos on "The In Crowd," one of Lewis most recognized compositions.

Among jazz/fusion bassists, two names rise above others to the point of reaching the status of legends. One of them is Jaco Pastorius; the other one, Stanley Clarke, closed up the second night of the Puerto Rico Jazz Fest. With the absence of Hiromi Uehara, what could have been a power trio turned into an explosive duo plenty of intense solos between Stanley Clarke and young drummer Ronald Bruner. The energy and flawless technique of these two virtuosos is simply impressive.

After the Saturday cancellation due to the constant rain, the festival started its last night with the presentation of the students of Berklee in Puerto Rico. Each year music students from Puerto Rico receive financial aids and scholarships from Heineken and the Berklee College of Music.

But what everyone was waiting to see on Sunday night was the return to the Puerto Rico Jazz Fest of Puerto Rican master saxophonist David Sanchez. Sanchez brought us a premiere of his new project Ninety Miles, which includes vibraphonist Stefon Harris and trumpeter Christian Scott. Accompanying them on Ssunday night were bassist Luques Curtis and drummer Henry, both excellent instrumentalist and both from Puerto Rico.

The melodic and rhythmic balance in Sanchez improvisations matched perfectly with Scott’s intensity and Harris’ elegance and fluidity on the originals "Brown Bells Blues," "Echa," The Forgotten Ones," "Paradise Found" and "City Sundown."

For the second consecutive year, trumpeter/director Humberto Ramirez and his big band were the closing act of the festival. For this year Ramirez prepared a nice tribute to Tito Puente, Tito Rodriguez, La Lupe and Frank Sinatra. The festival ended with the audience dancing in the aisles and remembering the music of the Latin big bands of the 40's and 50's.
Publicado por Jazz n Bossa en 9:48