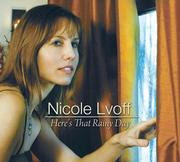 Here's that rainy day is the debut album from California native singer, Nicole Lvoff. An album with delicate arrangements plus the crystal clear tone and sweet voice of Nicole Lvoff on songs like Darn that dream, Here's that rainy day, the slow and sexy Angel eyes and Billie Holiday Don't Explain. This is music for romance, to listen with that special someone.

But Nicole and her band can swing too. Listen to the slow swinging version Sometimes I'm Happy, the upbeat swing arrangement of Too marvelous for words and Softly as in the morning sunrise. Nicole puts the sexy back on the song Fever and the whole band show their latin side in the classic Caravan, with some mambo touches in the improvisations.

The album also includes a couple of songs I haven't heard in a while, like Richard Adler Whatever Lola wants and the beautiful english version of Luis Bonfa Manha de Carnaval from the movie Black Orpheus. It was through this movie most people heard the music of Bonfa and Jobim for the first time.