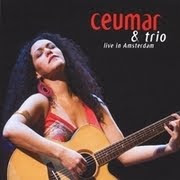 If you are not familiar with Ceumar music, you are up for a treat. Ceumar beautiful voice and poetic singing style will surely captures you. If you are already a fan, like me, you will love the jazzy arrangements of some of your favorites Ceumar songs.

As a composer her lyrics has a poetic quality also. A good example is the first song on this album, Oracao do Anjo. A prayer asking God not to let her die before seeing the world.

The jazz arrangements works perfectly with Ceumar music. The second song, Banzo, is one of the jazzier ones on this CD, with syncopated rhythms and a nice swinging groove.

Dindinha is one of three Zeca Baleiro compositions on this album and the title of the debut Ceumar CD. One of the most beautiful songs recorded by Ceumar and in my opinion already a classic of brazilian music. Ia Ia is another composition by Zeca Baleiro, recorded for the first time on this live album.

Jabuticaba Madura is another wonderful Ceumar original song. Jabuticaba is a small black fruit from Brasil that Ceumar compares to the eyes of a man. Frans plays a melodic solo on bass and does a masterful voice solo simulating a trumpet.

Zeca Baleiro Pecadinhos (little sins), also with prayer like lyrics, this time asking for forgiveness for little sins that do not hurt anybody. Danca is a Ceumar song, almost like a waltz, inspired in the music of cuban piano player Yaniel Matos.

Girias do Norte with rhythms from the north of Brasil, and obvious african influences, is a fun and danceable piece. The album close with the almost lullaby song Gira de meninos.