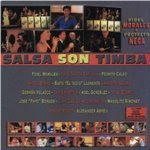 Review:
Drummer/percussionist/composer/arranger and musical director Fidel Morales re-releasing of his 2005 masterpiece album Salsa Son Timba is a good news for all salsa and cuban music fans. Fidel recorded this album in Cuba with some of the best musicians from this caribbean island, including timbal player legend Amadito Valdes.

Besides being a master drummer and percussionist, Fidel is a creative arranger and composer. Fidel wrote or co-wrote five of the eight songs on this album, each one with inventive arrangements, mixing the old and new school styles of cuban music. The music on songs like "Atrevete", "Remedio" and "Yo sere para ti" falls more into a romantic salsa category. In contrast, songs like "Mamina" and "Salsa Son Timba" have the more classic sound of the Cuban Son.

Every song on the album have a different, extremely talented singer, everyone of them providing great "soneos" (improvisations done by the singers between the choruses). But Teresa "Tete" Cartula deserve a special mention with her fabulous voice and style reminiscent of great female voices of Cuba like Omara Portuondo.

This are danceable rhythms, played here with the "afinque" required for this kind of music. Afinque is the cohesiveness of the musicians, especially the rhythm section, necessary for any kind of music, but even more essential when playing afrocuban music.

Good cuban music played the way is supposed to be played; that is what Salsa Son Timba is all about.