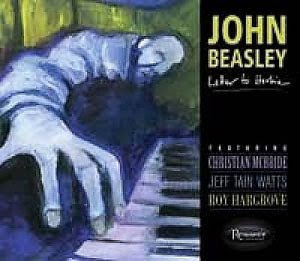 Those who don't yet know John Beasley are missing the opportunity to hear one of the best pianists and improvisers on the jazz scene today. Beasley is a master musician, with total command of the jazz language, and his playing is always intense in both emotion and technique.

John Beasley's 2009 album, Positootly (Resonance) was nominated, more than deservedly, for a Grammy Award for best jazz instrumental album. Even though Letter to Herbie, his previous album released in 2008, was not nominated for a Grammy, it might as well have been.


Both albums have striking similarities in the quality of the music and musicians; every one of them is at the top of their game on this album. What comes out of this group of jazz giants is music that keeps the mind engaged and always guessing what's coming up next; with constant tempo changes and creative, virtuosic improvisations.


Contrary to Positootly's collection of mostly Beasley originals, Letter to Herbie is dedicated to the music of Herbie Hancock. The swinging "Three Finger Snap" and the elegant "Here and Now" are the only John Beasley originals on the album, both featuring the rhythmic and harmonic complexity to stand beside Hancock's compositions.


Taking on the music of Herbie Hancock, one of the best pianists in jazz history, is not an easy task, but Beasley and his group do a superb job reinventing some of his masterpieces. Beasley's arrangements of "The Naked Camera" and "Vein Melter" are funkier and livelier than Hancock's versions, while the waltz-like arrangement of "Diana" and fast swinging tempo of "Eye of the Hurricane" are closer to the originals.