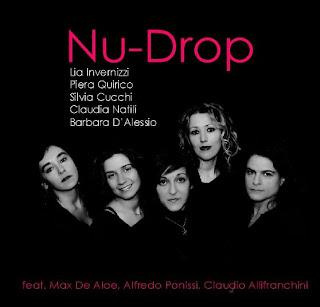 Review: The history of Jazz music is full of great female musicians. But rarely you will have the opportunity to listen to an all female jazz band.

Nu Drop is an all female jazz band. True, they got a little help from some male musicians friends, Max De Aloe on harmonica, Alfredo Ponissi on flute and tenor sax, and Claudio Allifranchini on soprano and alto sax. But the rhythm section, the essence of a jazz band, it is all women. Piera Quirico on guitars, Claudia Natili on bass, Silvia Cucchi on piano, Barbara D’Alessio on drums and singer Lia Invernizzi.

Lia is an excellent singer with a powerful, versatile voice. Her style is strongly influenced by Bebop but she can sing the blues too. On tracks like Camel’s Blues and A shadow of solitude there is a touch of Broadway on her phrasing and her scats are fabulous on The day of your return, How Sarah Thrills and Who’s crying for the man. But that’s not all, Lia is also a great composer, she wrote or co-wrote eight of the songs on this album, including the interesting changes in tempo on the tracks Who’s crying for the man, Love is over matter, You did you don’t and the french song Le Port de Beaulieu.

The amazing playing of bassist Claudia Natili and drummer Barbara D’Alessio keep the band swinging. Piera rhythmic guitar and Silvia subtle piano playing provides the harmonic background to most of the sax, flute and harmonica solos, but on tracks like The day of your return and How Sarah thrills they have the chance to show their abilities as improvisers. Listen to Piera and Silvia graceful solos on the bossa Sohraia.

If you think only men can play jazz, listen to Nu Drop, these Italian ladies can really play and swing.

Tracks: Black moon, Camel's Blues, A shadow of solitude, How Sarah Thrills, Le Port de Beaulieu, The day of your return, Sohraia, Who's crying for the man, Love is over matter, You did you don't, Nothing by chance