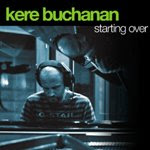 Review: Kere Buchanan received a little help from a lot of good musicians, but Starting over is definitely his project. Kere is not only the producer, but he also wrote or co-wrote most of the songs on this album. Additionally he plays drums, keyboards and does backing vocals.

The first song, Never be another next time, starts with powerful licks by Chris Kamzelas on electric guitar. Bass and guitar provides a nice groove to this is a song, a little bit alternative with touches of southern rock.

Some of the songs like Love’s Stronger, Starting Over and the instrumental Hymn for Anders have kind of a modern jazz influence, similar to groups like Fourplay. But most of the music on this album takes me back to 70’s and 80’s, like the soul, disco music feeling of Waiting for Love. The music arrangement, the sound of the Hammond organ and even Glenn Bidmead voice tone on the tracks Heartbreaker and Through the tears, reminds me of one of my favorite groups from the 80’s, Foreigner.

There is a lot of singers on this album, everyone matched perfectly with each song. Glenn sings the rock songs, Steve Clisby deep voice provide the soul to the songs, Love's stronger and Trust. Geoff Robertson sings in the title track of the album, Starting Over. But my favorite, maybe because of my preference for female singers, is Michelle Martinez. She has a beautiful voice with lot of feeling and nice phrasing. Michelle sings in Waiting for Love and on one of the jazzier track, Easy does it.

Kere Buchanan Starting Over is a CD with good songs in a diversity of styles.

Tracks: Never be another next time, More than you know, Waiting for love, Heartbreaker, Love's stronger, Starting Over, Trust, Easy does it, Through the tears, Prelude, Hymn for Anders