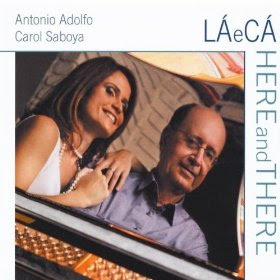 CD Title: Here and There

Review: The interaction of Brazilian music and Jazz was a perfect marriage since the beginning. The jazz influence was essential on the musicians that created Bossa Nova in the late 50’s. And when jazz musicians first heard Bossa Nova, they fell in love instantly. Brazilian pianist Antonio Adolfo was one of those young musicians deeply influenced by both, jazz and of course the music from his native Brasil.

On his new album, Lá e cá, Antonio continues this long interactive history between Jazz and Brazilian music. On his CD notes Antonio says, “Lá e cá showcases our Brazilian phrasing, as we interpreted tunes from the American Songbook and Brazilian songs”. That is exactly what he did, Lá e cá is collection of Jazz classics and Brazilian songs beautifully played by Antonio and a group of amazing musicians, including his daughter, singer Carol Saboya.

Antonio music selection could not have been better, four Cole Porter tunes, Easy to Love, So in Love, Night and Day and Every time we say goodbye, three songs from one of the fathers of Bossa, Tom Jobim, Sabia, Garoto and Nuvens Douradas and three of Antonio Adolfo compositions, Cascavel, Minor Chord and Toada Jazz.

The samba arrangements of A Night in Tunisia and Easy to Love and the Bossa feeling of Time after time are fantastic and show the affinity of Jazz and Brazilian music. Antonio piano phrasing is elegant and rich melodically, interesting in the use of harmonies and always with that touch of Brasil flavor.

On this album Carol sings in five tracks, one in portuguese, Sabia, and the others in English. Carol Saboya heavenly, crystal clear voice is perfect for the slow romantic songs All the things you are, Time after time and So in love. Listening to her wonderful phrasing on these tracks and on Gillespie A Night in Tunisia, you would not believe this is the first time she records American standards. Her version of Sabia is sublime, one of the best I have heard of this Jobim classic.

I fell in love with Carol Saboya voice when I heard Janelas Abertas her 1999 album with guitarist Nelson Faria. I did not know Antonio Adolfo was Carol Saboya father, until I heard Antonio and Carol 2007 album Ao Vivo. Today I am a fan of both of them. Just listen to Lá e cá and you will be a fan too.

Tracks: Cascavel, All the things you are, Minor chord, A night in Tunisia, Time after time, Easy to Love, Sabia, Lullaby of Birdland/Garoto, So in love, Round Midnight, Every time we say goodbye/Nuvens Douradas, Toada Jazz/Night and Day