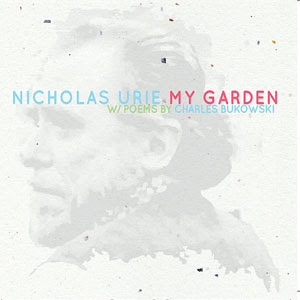 The combination of poetry and music is not new. Spain and Latin America have a great tradition of poetry musicalization. As part of the Nueva Trova style of the 1970s, singers like Silvio Rodriguez, Mercedes Sosa, Atahaulpa Yupanqui and Roy Brown set the poetry of some of Latin America's best writers to music.
Being that jazz is mostly an instrumental form, its fusion with poetry is not that common, which is one of the aspects that makes Nicholas Urie's My Garden so unique. Still in his mid-twenties, Urie is already a recognized composer/conductor, and has led large jazz ensembles as well as symphony orchestras.

After his critically acclaimed debut, Excerpts from an Online Dating Service (Red Piano Records (2009), Urie comes back with the equally creative My Garden, focusing on the poems of Charles Bukowski, born in Germany in 1920 but already living in the United States by1923. This poet/novelist's writing style has been described as minimalist and his poetry as sober, direct, realistic and sometimes crude. So the challenge here was to take that approach and translate it into music.

Urie—conducting a big band of great musicians—rises to the challenge, delivering arrangements with a good balance of simplicity and sophistication that perfectly reflects the mood and meaning of Bukowski's poems. The arrangements vary, from the classical feel of "My Garden" and march-like "For Crying Out Loud," to the swing tempo on "Round and Round," funky groove of "Lioness," and cinematic mood on "Slaughterhouse." With a tone reminiscent of Cassandra Wilson, Christine Correa is ideal for Bukowski' poetry, her empathy translating what Bukowski was feeling when he wrote lines like, "pain is a flower; pain is flowers blooming all the time" adds emotional depth to Urie's music.

Track Listing: Winter: My 44th Year; Round and Round; My Garden; For Crying Out Loud; Lioness; Slaughterhouse; Lean; Finality.