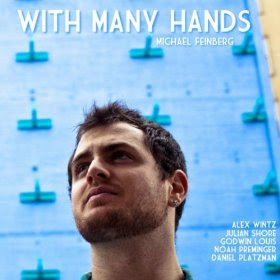 Bassist Michael Feinberg is a good example of the new breed of young jazz musicians equally comfortable playing a diversity of jazz styles. On With Many Hands, Feinberg's music goes from bebop to avant-garde, and from a ballad to a funky rhythm—sometimes in the same song—with amazing ease and conviction. Surely it all comes from Feinberg eclectic taste in music that also includes rock, hip hop and bluegrass.


"The Hard Stuff" has elements of avant-garde at the beginning, before it moves into a nice, funky groove. Feinberg turns drummer Daniel Platzman's original "Temple Tales," with touches of dissonance and free improvisation, into a swinging track, while the balladic "NBD" slowly grows in intensity, and contains some of the album's best improvisation.

The duo of alto saxophonist Godwin Louis and tenor saxophonist Noah Preminger delivers inventive and thoughtful solos over Platzman and Feinberg's solid rhythm foundation, especially on "Fighting Monster" and "Lost And Found," the release's jazzier tracks, both bordering on bebop.

The creativity, high energy, and emotional intensity of these musicians, along with their outstanding compositions, makes With Many Hands, an album worth hearing.