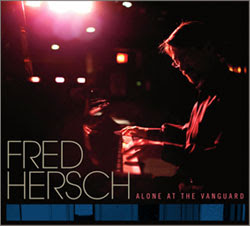 Alone at The Vanguard is pianist Fred Hersch's first solo performance at New York's Village Vanguard, after his serious illness and coma in 2008. The release was recorded during the final set on the last night of his six-day run in 2010, and the solo recital format gives the disc an intimate, almost classical music feel, engendering a full appreciation of Hersch's emotional and technical intensity.


A three-time Grammy nominee, two as a pianist and one as a composer, Hersch possesses a remarkable ability to cross from classical to jazz with ease. His classical style and lyricism are present on "In The Wee Small Hours Of The Morning," "Echoes" and "Pastorale," dedicated to composer Robert Schumann.

His superb interpretation of two originals, "Down Home," dedicated to Bill Frisell and "Lee's Dream," dedicated to Lee Konitz, as well as Thelonious Monk's "Work"—rhythmically reminiscent of ragtime—show Hersch's deep roots in the jazz tradition.

The performance also included the elegant samba, "Doce de Coco," the beautiful ballad "Memories of You" and, for an encore, a masterful version of Sonny Rollins' "Doxy."

Alone at The Vanguard is a clear statement that Hersch is back in top form, and that is surely good news for jazz.