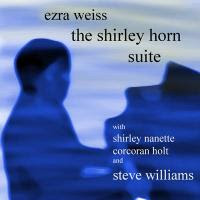 Portland based pianist/composer Ezra Weiss' fifth release is a tribute to Shirley Horn, who died in 2005 at age 71. Horn was an excellent pianist and sensitive vocalist, and a Grammy Award-winner in 1991, for Best Jazz Vocal Performance.
Weiss is certainly an extraordinaire composer, the winner of three ASCAP Young Jazz Composer Awards. Five of the nine compositions on The Shirley Horn Suite are Weiss originals, including "Shirley Horn's Sound Of Love," "May The Most You Wish For," the Broadway-influenced "Now That You Mention It" and "I Wish I'd Met You."

As a pianist, Weiss' style is subtle, playing just what is necessary to accompany Shirley Nanette's heartfelt vocals, minimalist and precise on instrumentals including "The Great City," "Blues For Porgy," "Estate," "Something Happens To Me" and Gershwin's "I Love You Porgy." His improvisations lean towards the harmonic, reminiscent at times of pianist like Vince Guaraldi and Ramsey Lewis.

Drummer Steve Williams and bassist Corcoran Holt—masterful musicians, both—complete the trio on this wonderful tribute to one of the best jazz singers of the late 20th century.

Track Listing: I Wish I'd Met You; The Great City; Shirley Horn's Sound Of Love; Blues For Shirley; I Love You Porgy; Now That You Mention It; Estate; Something Happens To Me; May The Most You Wish For.