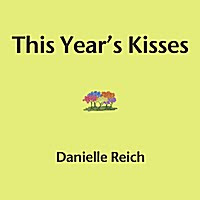 A strong drum roll starts This Year's Kisses, the new release by jazz singer Danielle Reich. Tenor saxophonist Seth Paynter and trumpeter Carol Morgan, who also produced the album, exchange melody lines in a style reminiscent of the first New Orleans jazz bands in "On the street where you live" the first track in an album full of swinging music and diverse influences. In her music, Reich shows influences of french music, boleros, broadway musicals and of course jazz standards.

Reich vocal delivery has a classic movie/Judy Garland feel on "If I Love You", but the music actually feels like a Bolero. Bolero is a slow music from latin america, that can be easily fused with jazz, creating a style called Bolero Jazz. Reich sings in pretty good spanish the classic bolero "Sabor a mi" by Alvaro Carrillo. Nice to see jazz musicians including this kind of music to their repertoire.

Gershwin "How long has this been going on" starts slow and then increase in tempo into a kind of cool swing. Morgan adds another good trumpet solo echoing the early jazz trumpet players like Louis Armstrong. Paynter hardbop-like solos adds intensity to the french music feel of "Alone Together". Reich also shows her french influence singing in perfect french in Jacques Brel "Ne Me Quitte Pas". Reich interpretation brings back memories of the great french singers like Edith Piaf. "Speak Low", normally treated as a ballad, receives here a more upbeat treatment. The tempo constantly changes between latin and straight ahead jazz.

The interesting arrangements of "All or nothing at all" feel almost like a tango at the beginning but then changes into a more traditional swing groove. The album close with Reich sexy singing in the medley of "Green Chimneys" and "Softly as in the morning sunrise".

Tracks: On The Street Where You Live, If I Loved You, How Long Has This Been Going On, Alone Together, Sabor A Mi, Crazy He Calls Me, Speak Low, This Year's Kisses, Ne Me Quitte Pas, All Or Nothing At All, At Seventeen, Green Chimneys/Softly, as in the morning sunrise