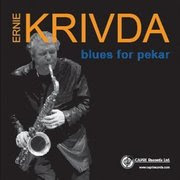 Tenor Saxophonist Ernie Krivda is one of the best kept secrets in Jazz. Not many people recognize his name because Krivda developed his career in Cleveland, instead of Chicago or New York, major cities often associated with jazz.

But once you hear his gorgeus tone, and astonishing fluidity of his improvisations you have to agree with Harvey Pekar when he said, "Krivda is one of the best tenor saxophonist in the world".
Krivda 2011 release, Blues for Pekar pays tribute precisely to jazz writer and critic Harvey Pekar.

All of Krivda solos are deeply rooted in the blues and every track is a master class on how to improvise, starting with "The end of a love affair". Trumpeter Dominick Farinacci stands his ground on this one ending in a improvisation exchange with Krivda reminiscent of early New Orleans jazz.

On the jazz ballads "More than you know" and "Darn that Dream", Krivda demonstrates he is just as good as a balladeer. On these slow tempo pieces his phrasing evokes the sensibilities and sound of the first great tenorists Lester Young and Coleman Hawkins. As part of his improvisations on "More than you know" Krivda cleverly quotes lines of "Softly as in the Morning Sunrise".