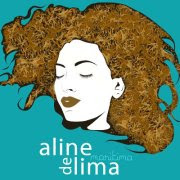 Maritima is Aline de Lima third release, and the follow up to her wonderful album Acai. On Maritima, this Brasil native, decided to produce and write most of the songs. The album was recorded in Paris, Rio de Janeiro and Maranhao, The result is a collection of exquisite and beautiful compositions that reflects the sound and tradition of her city Sao Luis de Maranhao. But Aline has been living in France for several years now, so her music has a distinct French music influence. In “Cri de Coeur”, a song composed for Edith Piaf, Aline sings in French and also plays the guitar.

Besides her soothing, beautiful voice Aline de Lima is an outstanding songwriter, “Flor de Brasilia”, “Fina Flor”, and “Infinito Blue” are just a few examples of Aline amazing ability as a songwriter to surround us with the beauty of her lyrics. Aline also wrote “Velho Novo Mundo” a beautiful samba dedicated to Paris. There are other influences on Aline’s music, like the reggae rhythms of “Upaon Acu” and “Fina Flor”, the Caribbean sounds of the marimba on “Empty Paradise” and the African rhythms of Cabo Verde on “Um Mar de Mar”. “Lua de Janeiro” and the haunting title track “Maritima” are closer to the sound of Aline de Lima first two albums.