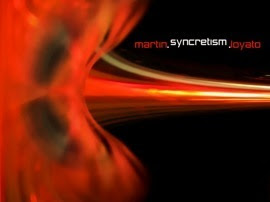 Review:
In the world of Jazz some artists dedicate their careers to keep the tradition recording new versions of jazz classics. Others, like Martin Loyato keep pushing the genre forward creating new sounds and style fusions.

The title of Martin new album is Syncretism. Syncretism is the union or fusion of different systems of thought or belief. Martin does just that with music on this album.The first track, To free minds starts with arabian melodies and rhythms mixed interesting compuer effects. A cool combination of old and futuristic sounds.

Song for Bunny is more in the tradition of latin jazz, fused with the rock sounds of the electric guitar and the flamenco flavor with the claps sounds.

Martin Loyato is from Argentina so of course the tango is present on this album. Following in the tradition of the great Astor Piazzolla, Mi Tango de hoy is an innovative tango with the addition of turntables and Indian tables on percussion. And Martin trumpet providing the jazz sound.

Demons and Seraphs is fascinating, kind of a cinematic piece with uncommon melodies, harmonies and musical instruments from Bali, Central Java and Sunda.

La ciudad de los angeles is a dance tune that at times sounds like a big band but with a modern feel and latin rhythms. Syncretism has a latin influence also, this time fused with electronic effects and Matin Loyato doing the vocals. In his trumpet solos sounds like Martin is quoting the melodies of Bobby Capo El Negrito Bembon, a song famous in the voice of puertorrican salsa singer Ismael Rivera.

A little stone in the way is a musicalized poem where Martin plays the huaca, a multi-chambered flute. Algo para dar is the more traditional piece on the album. No sound effects here, just Martin horns, the beautiful voice of Katelyn Kenney and the great acoustic sound of of puertorrican guitarrist Isaac Lausell in a track with influences of Bossa Nova.