CD Review: Henry Darragh - Tell her for me 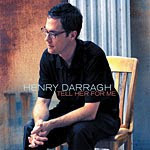 CD Review: Henry Darragh - Tell her for me

CD Title: Tell her for me

Review: There are some great male singers in the history of jazz like Louis Armsrong Frank Sinatra, Tony Bennett and more recently Harry Connick Jr. but male jazz singers have always been a minority. Well there’s a new name to add to the list, talented singer, composer, piano and trombone player Henry Darragh.

Usually jazz singers prefer to record recognized jazz standards instead of original compositions. Henry Darragh chose the hard way, recording mostly originals on his album Tell her for me.

Henry strength as a composer is his ability to write about situations everyone can identify with. For example Regret is a song about the regrets of being afraid to talk to a woman you like, just to ask yourself later, what if?

Once in a while lyrics are another good example, this time the question “is that special person thinking about even if it is just once in a while?” Master trumpet player Carol Morgan plays a great solo on this one.

As a singer, Darragh voice is similar in tone and phrasing to Harry Connick Jr. The album also includes the instrumental piece Early, where everyone has a chance to show their improvisation skills, including Henry Darragh on trombone.

Tell her for me is an excellent debut album for this multitalented singer/musician/composer.

Tracks: Hey there, Regret, Everything happens to me, Once in a while, Early, Dream boxes, Missing you, Tell her for me, Wrong ending, Look for the silver lining, The Harvard dictionary of music song