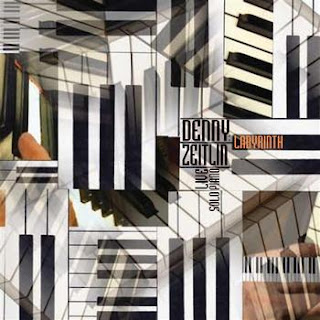 With an intro that borders the avant-garde ala Cecil Taylor, Denny Zeitlin welcomes the listener to his innovative and gorgeous interpretation of the Wayne Shorter classic, “Footprints”, the first track of his live solo piano album Labyrinth. Zeitlin playing is emotionally and technically intense, even in his beautiful renditions of the lyrical Tom Harrell bossa nova, “Sail Away” and the Irvin Berlin standard “They say it’s wonderful”.

The intensity increase and Zeitlin demonstrates his impeccable technique with dazzling high speed runs in the fast tempo “Lazy Bird”, a composition by John Coltrane. The tempo slows down for the emotional and sublime sound of the ballad “As long as there’s music” and the outstanding Zeitlin original composition, “Labyrinth”, a track with unexpected melodic, rhythmic and harmonic twists and turns.

Zeitlin also embarks in harmonic and tempo explorations on his interpretation of the classic show tune from the Rodgers and Hammerstein 1943 musical Oklahoma and on Arthur Schwartz “Dancing in the Dark”. Zeitlin goes to Brasil on his samba influenced original composition “Brazilian Street Dance”, a piece with dense textures and rhythms. The album close with “Slipstream”, another Zeitlin intense original also reminiscent of Cecil Taylor free improvisations.