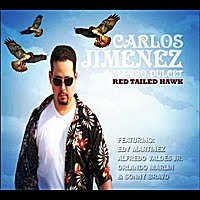 I have been following Carlos Jimenez career for couple years now, and wrote reviews for his two previous albums, El Flautista (The Flutist) and Thoughts. Both albums were totally different in style, a distinct latin flavor in El Flautista mellowed down with a smoother jazz sound for Thoughts. In either style Carlos always demonstrates his good sense of melody with lines that seamlessly flow in and out of the rhythms.

Carlos Jimenez latest release Red Tailed Hawk brings some surprises. For once, Jimenez decided to venture as a singer, and he is quite good. He sings in almost all the tracks on the release except on “Red Tailed Hawk”, “Tomando Café” and Rafael Hernandez “Cachita”. On these tracks Carlos concentrate on doing what he does best, playing the flute with emotion, amazing technique and limitless imagination.