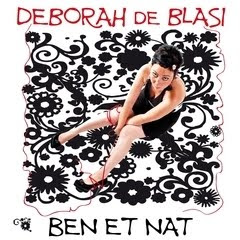 Playful with sense of humor, and a lot of sensuality, that is the music of Deborah De Blasi. De Blassi style borrows from lots of places, it has a distinct French feel but with a vintage sound. The rhythm and lead guitar on the songs “Cette Fille Est Un Canon”, “Chemise Swing” and “Vas-Y Swingle Gitani” echoes the sound of the great French jazz guitar player Django Reinhardt. De Blasi slows down on the exquisite Bossa Nova “Mes Petites Chaussures En Daim”.

De Blasi goes back to the French sound on the frantic pace of the album title “Ben Et Nat”, “Mirabelle Swing”, Week-end A Metz” and “Sur Les Routes De France”. De Blasi sensuality is more evident on songs like “Mon Ange” and “Mon Pays”, the lyrics sounds provocative even if one do not understand French. As good as De Blasi is as a singer, she is even better as a composer. These are not French classics, all songs on the release are De Blasi originals, including the two Spanish lyrics, “Que hare de mi” and “Para mis sobrinos”.