CD Review: Wayne Wallace - To Hear from There 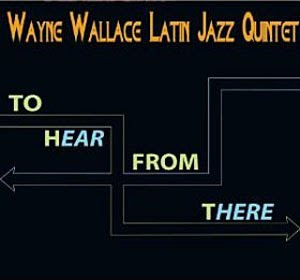 Wayne Wallace continues to explore the infectious Afro-Cuban rhythms on To Here From There, the follow-up to his 2010 Grammy-nominated album, Bien Bien!< (Patois Record, 2009).

Wallace is a trombonist with vast experience that includes collaborations with artists such as Count Basie, Joe Henderson, Lionel Hampton, Sonny Rollins and Tito Puente. Wallace Latin Jazz Quintet plays like they were born in Cuba.

The danceable "La Escuela" with its piano montuno and the distinctive clave of the Cuban son is dedicated to La Escuela Nacional de las Artes en Cuba, where Wallace studied in the 1990s.

Wallace shares the spotlight with Jeff and Natalie Cressman, and Dave Martell, in a battle of master trombonists on the guaguancó "Serafina del Caribe." On "Ogguere," Wallace masterfully improvise over a 6/8 groove, a rhythm common in Afro-Caribbean music and similar to the fusion of jazz and Puerto Rican bomba done by trombonist William Cepeda.

To Hear From There also includes a dazzling rendition of Juan Tizol's "Perdido," sung by Kenny Washington, and the wonderful soneos and beautiful voice of singer Bobi Cėspedes on the Cuban classic, "The Peanut Vendor."