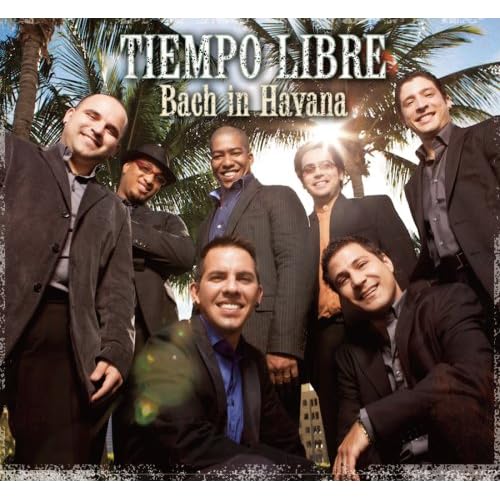 Review: In the 40's, the fusion of Jazz music with the rhythms from Cuba created Latin Jazz. Jazz music itself is a product of a fusion of all the styles of music (including classical music) present in New Orleans at the beginning of the 20th century. Now, at the beginning of the 21st century, Tiempo Libre new cd, Bach in Havana, connects the rhythms and sensibilities of Afro-Cuban music with the compositions of Johann Sebastian Bach.

On Tu Conga, the infectious rhythms of Conga, the music played in Cuba during Carnaval, are mixed with melodies inspired by the Fugue in C minor. The lyrics are an homage to Johann Sebastian Bach.

Fuga is a delightful fusion of Cha-cha-chá rhythms with the Fuga movement of the D minor sonata.

My favorite is Air on a G string, this time played in a Bolero style. The always soulful playing of Paquito D'Rivera on alto sax is reason enough to buy this cd.

The repetitive arpeggios of Prelude in C minor are combined nicely with the guaguancó clave on Clave in C minor. Guaguancó is another traditional dance from Cuba.

Gavotte is based on French Suite No. 5 in G major, played over a Son clave. For those unfamiliar with cuban music, son is a dance music from Cuba, one of the cuban rhythms that influenced musicians (mostly from Puerto Rico) living in New York in the 70's, to create Salsa music.

Mi Orisha starts with a solo by Yosvany Terry on the shekeré, a percussion instrument made from gourd, netting and beads. The melodies on this one are based on the French Suite No. 2 in C minor.

Minuet in G is changed from the traditional 3/4 to 4/4 to meet the guaguancó clave. The lyrics describes the sensual pleasures of dancing guaguancó.

On Olas de Yemayá the melodies are inspired by Preludio in C major beautifully played over Batá drums rhythms. Batá drums are used also on Kyrie, after an opening from Mass in B minor. Batá is the sacred drum used in Santeria to call down the Orishas powerful deities.

Baqueteo con Bajo is a Danzón, one of my favorites Cuban dances. On the second part the montuno enters with yet another brilliant intervention by Paquito D'Rivera this time on the clarinet. Timbach is inspired by the Prelude in D major with a mix of different cuban rhythms.