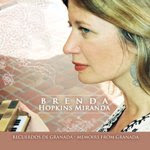 Get Your Own Free Hypster.com Playlist.

Review: Every once in a while one comes across a CD of such quality and beauty that restore your faith in music. Brenda Hopkins Miranda’s Memoirs from Granada is that kind of CD. A music jewel from beginning to end, in Memoirs from Granada, Brenda captivates the listener with an exquisite fusion of Jazz, music from Spain and of course, music from her country, Puerto Rico.

Brenda Hopkins is a wonderful pianist, with extraordinary technique, equally impressive playing either Jazz, Rock, or Classical music. With Memoirs from Granada, Brenda adds to that mix, the musical experiences she had while living in Granada, Spain.

Memoirs of Granada starts with a beautiful piano intro on the first track, Miranda, a composition full of melodies played with passion and intensity. Brenda brilliantly used melodic ostinatos to state a theme and create different moods. Ostinato is a repeated melodic or rhythmic pattern.

The melodies on The Return show the strong Arabic influence in the music from Spain. On her improvisations, Brenda plays masterfully with the melodies, harmonies and rhythms, accompanied once again by the excellent playing of Efrain Martinez on drums and Aldemar Valentin on bass.

Plaza Nueva starts with a fun intro, kind of dissonant. On this piece the music of Spain fuses with Jazz in a perfect musical marriage. Carlos Sanchez is amazing on trumpet with touches of be bop on his phrasing, and Brenda plays some of his best solos on piano. Hector Matos and Samuel Morales play drums and bass on this one.

Carlos Sanchez trumpet steal the show on Mi Sacromonte, with melodies reminiscent of the Cool Jazz era. Carlos powerful solos and high notes are a perfect match for the quiet intensity of Brenda’s music. Brenda always finds a way to capture the senses with magnificent compositions and energetic playing.

The beautiful, almost heavenly piano melodies on Vimaambi, change into a more rhythmic piece with the flamenco dancer (bailaora). There are some solo piano tracks like Wings of Illusion and Absence for Brenda to showcase his classical influences and technique. And on Chawarma there’s a funky feeling with some Rock influences.

There is an almost nostalgic feeling on the piece Huerto de Juan Rana, with melodies that seems to evoke memories from Spain. El Darro contains music that invites you to close your eyes and let music take you away.

Confeti is the most festive track on this CD, with a fusion of Puerto Rico folk music in the melodies with latin jazz rhythms.